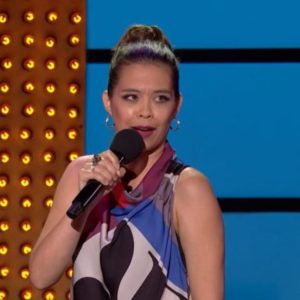 As seen on Live at the Apollo!

Fearless, provocative and very funny, Ria Lina is a highly accomplished comedian, writer, actor and one of the hardest working performers in the business. After a stand out debut on Mock The Week (BBC Two) Ria is quickly becoming a household name. A hugely admired act on the UK comedy circuit and international headliner, this multi-award winning artist commands respect from the moment she walks onstage and delivers with natural ease, energy and fierceness.

Ria is the only Filipina comedian in British stand up and has a BSc in Experimental Pathology, an MSc in Forensic Science and a PhD in Virology under her belt, so it’s not only Ria’s comedy that’s highly intelligent. A regular pundit on Sky News, BBC News, Times Radio and TalkRadio, Ria is in demand for both her scientific insight, confident delivery and biting wit.

Search for your favourite comedian:

Sorry, we aren't online at the moment. Leave a message.

We'll get back to you as soon as possible.
Login now

Need more help? Login to chat to us live.

Help us help you better! Feel free to leave us any additional feedback.

How do you rate our support?